A “Hybrid Occupation”: The populace is never informed that it lives under an occupation. On its own, the populace will never figure it out.

Countries with European population live under a hybrid occupation. How to define it?

Countries with European population are living under a hybrid occupation by the “Hybrid British Empire”. Another way to define this entity is “The British World Order”. In the “Hybrid British Empire”, “Hybrid” is like in a hybrid warfare.
Here is one of the definitions of the Hybrid warfare = “multiple instruments of power and influence, with an emphasis on nonmilitary tools, to pursue an agenda, someone’s interests outside its borders”.

A “Hybrid Occupation” is an occupation where the occupant never invades the victim country but puts in place a collaborator regime by infiltration of the bureaucracy and, as Machiavelli wrote, by “creating a friendly oligarchy”. The populace is never informed that it lives under an occupation. On its own, the populace and the pseudo “elites” will never figure out that they are under an occupation. This “hybrid occupation” is the current situation in the US. Europe is another slave, another case of a sadistic hybrid occupation. Russia and Ukraine are under a hybrid occupation by the British. The war between Russia and Ukraine is organized and conducted by the British and their infiltration networks. The war between two sides, both controlled by the British is what is coming between Russia and the US, including an exchange of nuclear strikes.​
However, in Russia and Ukraine today, there is a real resistance to the covert British occupant.

One of the forms of hybrid occupation is “a Lackey State”. In Europe, Holland and Switzerland are lackey states of the British “World Order”.
The case of Switzerland is interesting. Indeed, Switzerland is arguably the best country in Europe, with great democratic traditions (“a parliament” in every village), with smart, decent, people, who are relatively well off. But surprisingly, Swiss bureaucracy is the most servile, zealot and repulsive lackey of the Hybrid British. It is not understood by the Swiss themselves, despite solid intellectual traditions, and despite the strong sovereignist political movement in Switzerland. 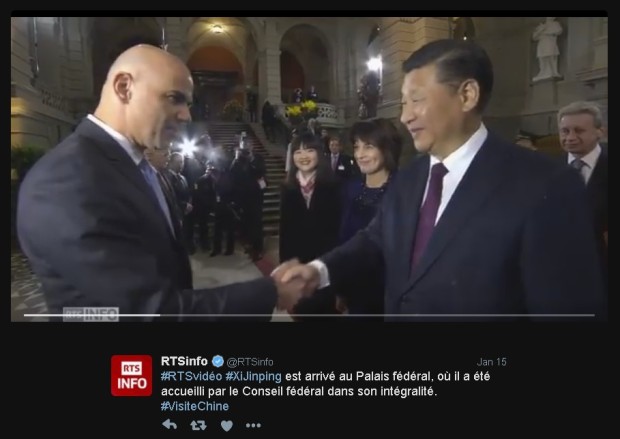 Switzerland is lackey state of the British World Order. Here, the Swiss government is lined up as lackeys to welcome the British favorite pet, China, in the person of the Chairman Xi.

The lackey state of Switzerland and of Holland allows a better reading of different special operations run by the British. Thus, the highest and the most immediate danger for the world is the possible attack of North Korea by the saboteur US generals. The attack will be sabotaged, the South Korean ally will be sabotaged and sacrificed, just as everything where the American generals and bureaucrats have been involved in the last 50 years. Thus, Seoul, the capital of South Korea, and an agglomeration of 20mln people, may be destroyed by the 20 thousand artillery units of the North Korean army.

Actually, Switzerland is not so great. The state media still brainwashes the populace with "global warming" in 2016. https://t.co/dho00pbdt2

#ApplePay arrives at the same time in Switzerland and in Russia. Switzerland = whore of the Globalists. Vlad Putin? Savior?@adamcurry NA#868 https://t.co/83Bop3X3e3

Sabotage: the new chief of the Swiss army is an idiot. Survival Rule: Switzerland is another bantustan, a colony. https://t.co/F5fzk8BOyH

In Australia, Switzerland, Ukraine, all the media are anti-Trump. This is the Global Covert Fascist State in action. This is its propaganda>

@NNeandertalienE 2> Results of the "Obamacare style" insurance in Switzerland are catastrophic. Premiums r up each year, public is dumb>3

Countries with European population live under a hybrid occupation. How to define it?

← The “deep state” is an imaginary entity. The entire US bureaucracy is engaged in an open sabotage and treason. An update on the US as of July 2017.
The saboteur “elites” have no access to a good health care. Top US “Globalists” are sick as dogs. →