A US intelligence commander: “The U.S. had urged Ukraine not to resist the Russian takeover of Crimea, though Ukraine had adequate forces to do so”.

George Woloshyn, a former naval intelligence commander: “The U.S. had urged Ukraine not to resist the Russian takeover of Crimea, though Ukraine had adequate forces on the ground with which to do so”.

Crimea, July 2013, 7 months BEFORE annexation by Russia. The Ukrainian armed forces conduct artillery training. The army was ready to defend

The term “The US”, used by George Woloshyn, is misleading. Thus, there is no such thing as “The US”. There are several factions of the US bureaucratic and intelligence apparatus that do not act in a coordinated manner anymore. The correct statement should sound as follows: “The US State Department urged Ukraine not to resist the Russian takeover of Crimea”. The US State Department is a saboteur anti-American faction of the US bureaucracy. The goal of surrendering Crimea was to trap the Russian state in a war logic. It was a major step in the preparation of the coming genocidal world war. This operation and the coming genocidal world war, was planned and is being executed by the “London Politburo”. This “London Politburo” is at the head of the Covert Global Fascist State. It controls and manipulates both the US and Russia.

The US Military, the Pentagon, belongs to the “Benign Faction” of the US bureaucracy. The Pentagon opposed and has been resisting ever since the sabotage of Ukraine. The analysis of Mr. Woloshyn is in line with the position of the Pentagon. But the US Military is loosing every battle to the more sophisticated saboteur factions and to their Masters in London. The US Military has been mostly helpless despite its huge budget and its own intelligence agency that could easily counter the saboteur factions, i.e. the CIA, the State Department and the Democrat Administration in the White House.
Thus in Ukraine, Russia’s position is extremely vulnerable. The South of Russia is supplied with natural gas through a single pipeline which goes through war torn areas of Eastern Ukraine. It is impossible to protect it. “Russian Muslim Terrorists” or some “Unhappy Russian Militants” could take responsibility for an explosion of the pipeline. In practice, a drone would be enough to carry out such an attack. No need to risk a special operation team. The pipeline runs hundreds of kilometers and with regular valve station above the surface.
Another vulnerable pipeline supplies with gas Crimea. In another act of spectacular sabotage, at the same time as they surrendered Crimea itself, the idiotic Ukrainian top bureaucrats surrendered to Russia the Ukrainian gas platforms that were extracting shell gas off the Ukrainian coast in the Black See.

Survival Rule: The fact that a sabotage at such scale can exist and can go unpunished is the ultimate
proof that the European Civilization does not have adequate political system.

The pipeline that supplies Crimea with gas goes hundreds of kilometers on the bottom of the Black Sea and can be attacked at any point. The easy way is to assign the disruption to a “technical difficulty” and to accuse Russia of “war mongering”. The disruption itself will be big enough a problem for Crimea and for Kremlin.

Another important fact, is that there is no need to fight the entire Russian state and to fight everybody in Kremlin. In fact, Russia’s Security Council has already identified Putin as a mole. The Russian Security Council is ready to get rid off Putin. The Russian Security Council members however have one big problem. The same problem that the US Military and the healthier parts of the US intelligence and bureaucratic apparatus have. This problem is an insufficient intellect. The top bureaucrats are not “ideologists” at all. They do not have clear vision, and they are incapable to generate a strategy, an agenda. These should be given to them. Thus, the Russian Security Council members lack intellect to make a move against Putin. Also, they are incapable to come up with any other strategy than the “confrontation with the West” logic, that the “London Politburo” served them. But if the members of the Russian Security Council and the bureaucratic and business “elite” of Russia are given “a détente agenda” after Putin is removed, then they will quickly make a move. There is indeed one positive thing about the Russian intelligence apparatus. That is they are not impotents. The recent wave of assassinations of the key figures involved in Crimea and Eastern Ukraine occupation, including several top Russian military officers, is a good illustration of that.
The Russian populace is also disappointed and would welcome Putin’s demise. Indeed, only 36% of Russians participated in the parliamentary elections last month. This is how the stupid populace expresses its insatisfaction. They do not vote against the politicians they don’t like. Instead, they do not go to vote altogether. Idiots.
Putin is indeed a mole. Putin, a corrupt and sexually deviant KGB officer, was recruited by Western intelligence agencies when he was stationed in Germany in the late 1980-ies and early 1990-ies. Putin later became a “cadre” in the pool prepared by the London Head Quarter of the Global Covert Fascist State. Putin was placed at the head of the Russian state in 1997 by the alcoholic Mr. Yeltsin, the president of Russia at the time. Mr. Yeltsin, a manipulated alcoholic, was advised and controlled from London. Yeltsin disfigured Russia. Indeed, Yeltsin ordered the Russian central bank to land large amounts of money and to sell real assets to figurehead oligarchs. Thus, monopolistic businesses with figurehead oligarchs at the head were created in Russia. The oligarchs figureheads and the revenues from the monopolistic businesses were used to run and to finance the giant brainwashing machine that quickly turned Russian populace into semi-animals.

The biggest recent success of the “London Politburo” was in Syria. It looks like the US Military has been manipulated to clash with the Russian military there. According to Joel Skousen, there was a major tank battle near Aleppo. The US trained anti-Assad cannon meat, “Islamists”, tried to break the siege of the Eastern Aleppo with 95 tanks. Half of those tanks were destroyed by Syrian and Russian air force. Several recent angry comments by the top US Military commanders, notably by the Chief of Staff may indicate that the US Military did not like it, consider it “their own defeat”. The US Military command seems to be eager to fight the Russians in Syria. This is a mistake.

In Syria, Assad should be left alone. The Syrian people supported Assad and with a lot of courage fights back. The Syrian people showed enough courage. Assad showed enough courage. Assad is not a genocidal saboteur. Obama, Merkel, Putin, Ukraine’s Poroshenko ARE GENOCIDAL SABOTEUR PATSIES. Assad is apparently not. Compare Assad to Ukraine’s Poroshenko. Poroshenko is a political Geisha. An idiot from birth, Poroshenko apparently also suffers from a diabetic dementia. Poroshenko is ready to surrender anything, to betray endlessly. Poroshenko enjoys humiliation and takes humiliation constantly. Poroshenko committed multiple war crimes against Ukrainian army and people. So, why Assad is the archi-enemy and the genocidal masochistic geisha Poroshenko is not?
The US Military, other healthier parts of the US intelligence community, should not passively accept whatever agenda is served to them by the saboteur State Department and Democrat Administration. This applies to Russia, Syria, Ukraine.

I stop at this point though a lot more can be said. Notably, on the step by step plan of what the US Military should do in Ukraine, to address the situation there and to ultimately remove the genocidal patsy Putin from Kremlin. The first step should be the establishment of a robust presence of the US Military in Ukraine, first of all with the Defense Intelligence Agency, the D.I.A. This is a subject for another article.

Several tweets and links on the subject are below.

A former US naval intelligence commander:

“The U.S. had urged Ukraine not to resist the Russian takeover of Crimea”

@MaxRTucker @uatodaytv This "head" is precisely the guy who surrendered Crimea to Russia. A saboteur, a war criminal.https://t.co/83AKZ6WfOv

Woloshyn, a naval intelligence commander:”U.S. had urged Ukraine not to resist the Russian takeover of Crimea”

@PaulNiland @MaxRTucker G. Woloshyn, a naval intelligence commander:"U.S. had urged Ukraine not to resist the Russian takeover of Crimea">2 pic.twitter.com/JNvxkym4K6

2>My assessment (attached) is different today: The US State Dep+CIA = a saboteur faction, sabotages the US military

@PaulNiland @MaxRTucker 2>My assessment (attached) is different today: The US State Dep+CIA = a saboteur faction, sabotages the US military> pic.twitter.com/xcp32pcN7T

3>Woloshyn= naval intelligence= the Pentagon = the most abused and sabotaged US faction:

@PaulNiland @MaxRTucker 3>Woloshyn= naval intelligence= the Pentagon = the the most abused and sabotaged US faction: https://t.co/eNIdCDc2jF

a fierce fight between two factions inside the US bureaucratic and security apparatus. On one side we have the NSA, the FBI, the US Military. This faction is “The Resistance”. The success of Trump so far is a manifestation of this “Resistance”. This faction is “benign” in the sense that the US, the West, the people of European descent can live with it, as with a “benign outgrowth”. This faction wants to restore the “Empire” status of the USA.

The opposing faction is the saboteur “Regime of an Internal Occupation” of the US, or the current Democrat Administration with “Obama The Teleprompter Reader”, the CIA and the US State Department. This faction is a tool of the Covert Global Fascist State which has its Head Quarter in London. Their goal is to destroy the United States, the West in general, to covertly and overtly genocide the stupid populace of European descent. This faction is “malign” in the sense that it will kill its host, the US and the West, in the same manner as a malign cancer kills its host.

4>USA = a bantustan, subdued, controlled from London, looted at an unprecedented scale.

As an aside, note the following:

5>Another phenomena are the trolls, like this one: @PaulNiland This one is not an algorithm. He is a human. And a psychopath.

@MaxRTucker 5>Another phenomena are the trolls, like this one: @PaulNiland This one is not an algorithm. He is a human. And a psychopath. pic.twitter.com/bhUOG9cu6d

Survival Rule: both the “Outer Party”, or the bureaucratic and propaganda apparatus worldwide, and the “Proles”, the masses, the 90% of the population, are psychopaths.

Survival Rule: Russia is extremely vulnerable in Eastern Ukraine. Russia can be defeated in a smart way at any moment.

Putin’s regime is fragile – asymmetrical answer is to attack the pipelines by virtual terrorists – 11.03.2014 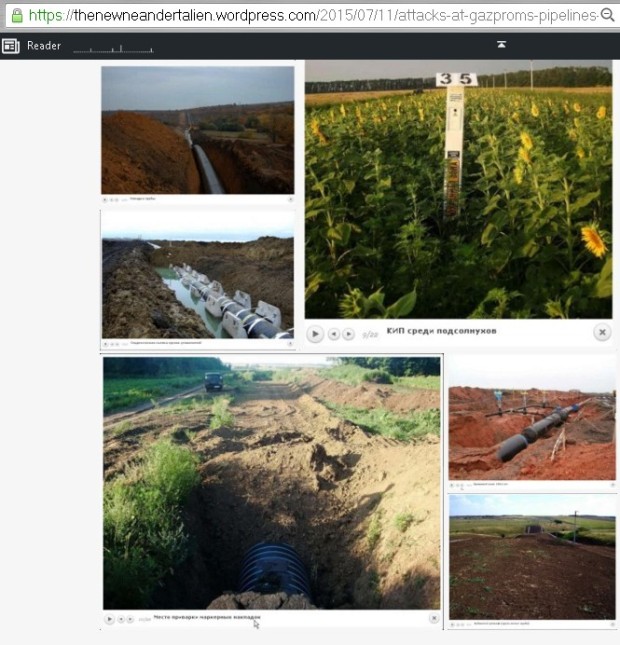 6> Survival Rule: no need for “toe to toe” with Russia. Enough to cut gas pipelines to South Russia(Eastern Ukraine) and to Crimea(Black Sea).

Survival Rule: no need for "toe to toe" with Russia. Enough to cut gas pipelines to South Russia(Eastern Ukraine) and to Crimea(Black Sea). https://t.co/u9Fg3pYnbw

← Russia: an on-going slow putsch of the “merger with the West” faction against Putin, a mole of the “Globalists”.
How the stupid and immoral populace, “the proles”, betray their Motherland. The example of the occupied Crimea in Ukraine. →