Putin is a mole of the “Globalists”. The powerful Kremlin’s “FSB faction” finally identified him and fights back.

Introduction by the New Neandertalien.

a spy who gradually achieves an important position within the security defences of a country.

“The Covert Global Fascist State” is “Covert” because the True Rulers protect themselves by secrecy, by anonymity, and expose only appointed patsies both to the public anger and admiration.

A Survival Rule: Obama, Putin, Merkel, Ukraine’s Poroshenko and most of the other leaders of the countries with European population ARE LOBOTOMIZED PATSIES.

The “Covert Rule” was suggested by Plato in the “Republic”. And it is being used together with several other of his suggestions. The advantage of the “Covert Rule” is that it is impossible to strike back against the Rulers. Indeed, it is not not clear who they are and where they are.

The Covert Global Fascist State is “Global” because it implements a global agenda and to a large degree already rules the entire planet.

The Covert Global Fascist State is “Fascist” because there is a collision between the Big Business and the State. Thus, the dominant search engine Google serves you propaganda disguised as search results.

A Survival Rule: Those who control the propaganda are the True Rulers of a country.

The situation in Russia can be better understood if we establish parallels with the situation in the US. Thus, the essence of the US elections is that they turned into a fierce fight between two factions inside the US bureaucratic and security apparatus. On one side we have the NSA, the FBI, the US Military. This faction is “The Resistance”. The success of Trump so far is a manifestation of this “Resistance”. This faction is “benign” in the sense that the US, the West, the people of European descent can live with it, as with a “benign outgrowth”. This faction wants to restore the “Empire” status of the USA.

The opposing faction is the saboteur “Regime of an Internal Occupation” of the US, or the current Democrat Administration with “Obama The Teleprompter Reader”, the CIA and the US State Department. This faction is a tool of the Covert Global Fascist State which has its Head Quarter in London. Their goal is to destroy the United States, the West in general, to covertly and overtly genocide the stupid populace of European descent. This faction is “malign” in the sense that it will kill its host, the US and the West, in the same manner as a malign cancer kills its host. 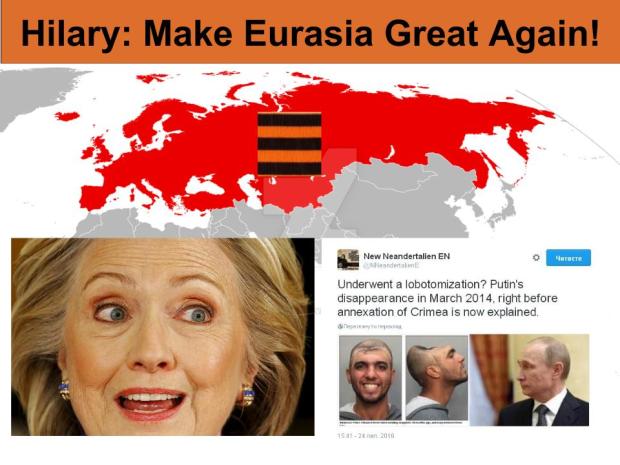 A Survival Rule: all the “oligarchs” in Russia became “oligarchs” because the Kremlin ordered the Russian Central Bank to loan them large sums of money to purchase real assets. Almost none of the “oligarchs” have any business skills.

Mr. Sergei Ivanov is the leader of the “FSB faction”, or the “merger with the West” faction in Kremlin, i.e. in the bureaucratic and security apparatus of the Russian state. Sergey Ivanov was the second most important person in the Russian political hierarchy, according to a Kremlinologist (and an IMF propaganda troll) Aslund, right until yesterday, when Putin dismissed him.

Putin is a mole who runs the Russain state. Putin was a corrupt or/and sexual deviant KGB agent in Germany when he was recruited by Western intelligence agencies. A lot of agents were recruited at the same time. For instance, Germany’s Merkel. She is also a patsy and a mole, her current orders are to destroy Germany and to genocide German people. The “handlers” of Merkel and Putin successfully created and maintained for years an image of “wise statesmen” for both Putin and Merkel. And only recently, both moles, Merkel and Putin, were “activated” by their “handlers” to take a suicidal plunge, to sabotage their countries and the world into chaos and genocide.

It looks that the Kremlin’s “FSB faction” lead by Sergey Ivanov, or the “merger with the West faction”finally identified Putin as a banal mole, a lobotomized remotely controlled patsy. And that the “FSB faction” has finally started to fight back.

The following article is a good description of the in-fighting in Kremlin by a Kremlinologist Aslund. Aslund spends most of his time as propaganda troll for the IMF, a criminal organization and a part of the “Malign faction”. The IMF notably organized an expropriation of almost USD50 billions of savings of the Productive Class in Ukraine through a fraudulent devaluation. But in this article Aslund wrote a rare useful description. Not all in his description is correct. Notably, Putin has a reasonably good control of the Russian military. And the intelligence of Sergey Ivanov, who majored University in “History of Art”, is exaggerated.

Russian President Vladimir Putin chairs a meeting with members of the Russian Security Council to discuss additional security measures for Crimea after clashes on the contested peninsula, at the Kremlin in Moscow, Russia on August 11 of 2016.

On August 12, Russian President Vladimir Putin dismissed his long-time chief of staff Sergei Ivanov. Ivanov was the second most important person in the Russian political hierarchy; this is a major change in the Putin government with many implications. Putin replaced Ivanov with Anton Vaino, a former diplomat and head of Putin’s protocol office for many years. Vaino is a grandson of Estonia’s former communist leader.

Putin and Ivanov reportedly attended the KGB training school at the same time, but unlike Putin, Ivanov was an outstanding officer. Ivanov, who speaks fluent English and Swedish, was KGB chief in Finland. He is secure, speaks happily with foreigners, and has a good sense of humor.

Ivanov was persistently a member of Putin’s inner circle. After starting as national security secretary in 1999, Ivanov was Russia’s minister of defense from 2001 to 2007. Putin promoted him to first deputy prime minister—letting him compete with Dmitri Medvedev for the position of president. Putin ultimately chose Medvedev, preferring the weaker candidate. In December of 2011, Putin appointed Ivanov his chief of staff.

Although Putin and Ivanov have been so close to one another, Ivanov has been seen as a rival to Putin. Ivanov used to say that Putin became only lieutenant colonel in the KGB, while he was lieutenant general. Their feuds have focused on security and international affairs issues. Ivanov is usually seen both as a hardliner and as a problem solver. He is a supporter of Russia’s state corporations—especially its armament industry—while he has no known connections with Putin’s billionaire cronies.

Ivanov has long been identified as the leader of the FSB—Russia’s internal security service—bloc in the Kremlin, which also includes National Security Advisor Nikolay Patrushev and FSB Chair Alexander Bortnikov, as well as former Prime Minister Mikhail Fradkov, who heads the SVR—Russia’s foreign intelligence agency. Against them stand the Presidential Guard, also known as the FSO, which Putin sees as his most loyal service.

The FSO has acted with and protected Chechnya’s President Ramzan Kadyrov, who is no friend to the FSB. The rivalry between the FSB and the FSO came to a head in February of 2015 with the murder of opposition leader Boris Nemtsov at the Kremlin. One side seems to have carried out this killing as a challenge to the other group. First, Ivanov disappeared from the public eye for a week, and then Putin was absent for ten days. No clarity was reached following the incident.

The fight flared up again in April of 2016 when Putin formed a new National Guard under the command of his long-time bodyguard General Viktor Zolotov from the FSO. Remarkably, on April 6 of 2016, a presidential decree appointed Zolotov as one of the twelve permanent members of the Russian security council, but on April 11 this decree was corrected to mere member, of which there are dozens. This indicates fierce resistance by the KGB generals on the security council spearheaded by Ivanov.

In substance, Ukraine policy has been evidently been bone of contention. In the spring of 2014, Ivanov allegedly inspired a leaked plan to take half of Ukraine—including Kyiv—to incorporate its military-industrial complex with Russia, which Putin did not support. Later on, however, Ivanov was rumored to complain about Western sanctions and urging Russian concessions to the West to ease such sanctions. The evidence is shaky, but Ivanov’s position seems to be one of either or: wanting to get as much as possible out of Ukraine, but ultimately reach a settlement with the West, while Putin seems comfortable with unsolved frozen conflicts that destabilize neighboring countries.

The timing of Sergei Ivanov’s sacking suggests that it was connected with disagreement with Putin over Russian policy toward Ukraine. On August 8 of 2016, Putin summoned his security council, but, exceptionally, only six out of twelve members attended. Ivanov was missing. On August 11, the security council met again with eleven of its twelve members present, this time including Ivanov. Ukraine was the main theme of both meetings. Presumably, Ivanov objected to the policy Putin proposed.

Today, Putin has changed the composition of the security council through a presidential decree but only marginally. Remarkably, he has not sacked Ivanov from the council. However, he has replaced the rather irrelevant former Minister of Interior Ruslan Nurgaliev with Vaino. Once again, Putin failed to promote General Zolotov. Thus, it does not look as if Putin has gained control over the security council, which appears to be the actual Politburo of his regime. The battle between FSB and FSO proceeds headstrong.

Anders Åslund is a senior fellow at the Atlantic Council.